Hurricane Harvey and The Little House of Glass 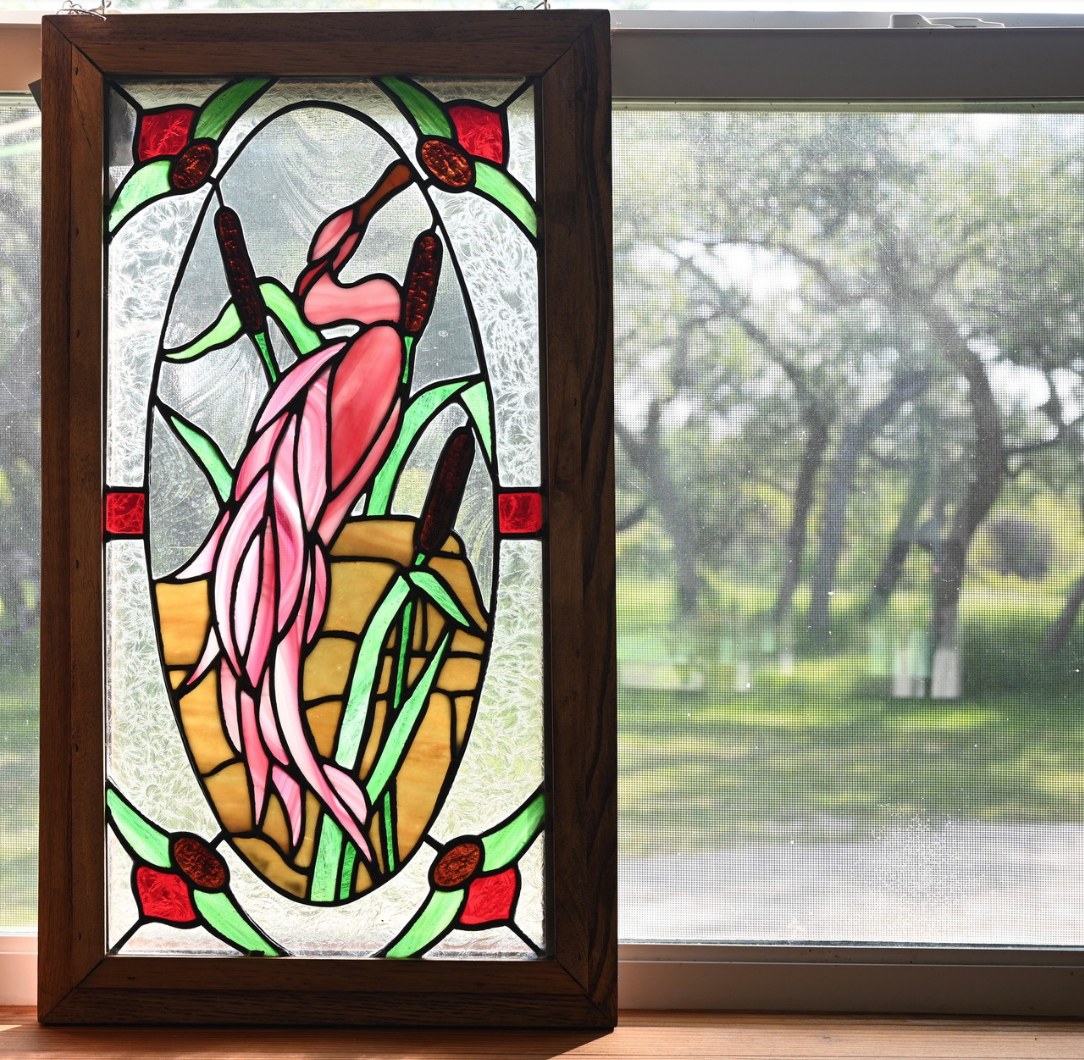 Rockport-Fulton is a hidden gem among the Texas coast for its sport fishing scene and festivals. Unbeknownst to many though is its affiliation with the arts. One example of its rich history from the Rockport Cultural Arts District website: “Simon Michael founded the Fulton School of Painting and later the Simon Michael School of Fine Art in Rockport in the late 1940s, after traveling around the world, painting with Picasso in Paris and working on Mount Rushmore.” It’s also home to three major art community events: a Studio Tour in the Spring, an Art Festival in the Summer, and a Film Festival in the Fall. Coastal Living named it a Top Ten Artists Colony too.

Among the many artists in the area is a small stained gallery called the Little House of Glass. The owner’s family is full of creative mindsets, so her vision and delivery is no surprise. But the story of how her work fared in the hurricane is.

The country is no stranger to hearing about the devastating effects of hurricanes. Every year, the South and East coasts brace for these potential storms. Houston and Galveston frequently have to prepare for the effects of high winds and heavy rains due to both their particularly flat geography and the routes of Gulf storms. But the Aransas Bay area — about 200 miles southwest and ground zero for Harvey — wasn’t as familiar with a storm of this caliber. The last hurricane above a Category 3 to make landfall here was Celia in 1970.

Most are familiar with the city of Rockport from the headlines. But the entire area in the network of towns nearby includes Holiday Beach, Goose Island, and Lamar on the north side, down the causeway to Fulton, Rockport, Estes, and City by the Sea, moving further down Highway 35 to Aransas Pass, Ingleside and Ingleside on the Bay, with Port Aransas, Portland, Corpus Christi, and Mustang Island around the south end of it. The counties they belong to are home to hundreds of thousands — Aransas with 26K, San Patricio with 67K, and Nueces with 361K residents. In addition, they serve as a second home to vacationers and Winter Texans throughout the year.

In the days leading up to Harvey, the forecast became ominous quickly. What was originally supposed to be a Category 2 and then a 3 quickly turned into a 4 right before it hit land. And local officials urged residents to evacuate as soon as they could. They knew how dangerous a Category 4 storm would be.

Harvey hit Rockport-Fulton and the surrounding area with 130mph sustained winds, over 4 feet of rain in certain areas, and countless tornadoes. [Some residents of the town say that they heard it was around 120, while official reports don’t cite an exact number. As the Weather Channel wrote in September 2017: “Hurricane Harvey may have been one of the greatest tornado producers for a tropical cyclone, but the actual number of tornadoes may never be known, as many of the tornado-producing cells are believed to have tracked near or through floodwaters and crossed each other’s paths.”]

About half of the city’s population stayed through the storm for various reasons. Some did it because they had stuck around through storms before. Others were worried about the looting that would ensue after — and it did by the next morning. A few stayed because they didn’t have the means to evacuate in time.

It was a terrifying night for those who waited it out, followed by a horrible reality the next morning for all. Harvey left much of the area unrecognizable.

The Little House That Stood

Laura, the owner of the Little House of Glass, had decided to evacuate last minute, so she had to leave her pieces behind. Knowing what local reports were saying, she assumed her work would be gone with the storm — but that was far from her worst fear. Rockport has been her home for the last 41 years. She worried first and foremost about her family and friends. But phone lines were down, so she couldn’t get in touch with them right away. There was no electricity and water while utility companies tried to get everything back up and running. And overall, the little town of Rockport was turned upside down. As one resident put it, “It looked like a blast zone.”

[Many people believe that a hurricane’s biggest danger is wind speed. In reality, it’s the side effects of the system that do the majority of the damage. A house fire during the storm accounted for the only fatality in Rockport during the hurricane. Storm surges that circled around to the west side of the peninsula — the opposite side of where the storm hit — leveled many of the houses in Copano Bay. Flash flooding and residual water left homes unlivable and accounted for a significant amount of the deaths in Houston. And the tornadoes previously mentioned indiscriminately tore through the area, leaving some places completely intact while demolishing next-door buildings entirely.]

As if the storm damage, power and water outages, demolished buildings, and blocked roads weren’t enough, looting began soon after. Many residents didn’t recognize the people trespassing on their land, and believe that some may have even been from out-of-state due to their license plates. Luckily for Laura and her family, a neighbor had run off a group who was trying to get into her home.

By the time she made it back to her property, she didn’t know what would be left. She had a home, some rental properties, and two shops — one being her gallery — all in the same area. And while the Little House of Glass miraculously survived the storm, her shop next door looked like it had imploded. She had damage to her main home. And there were fallen trees and debris everywhere.

August 25 was the two-year anniversary since Harvey made landfall in Rockport. While the mounds of trash and debris no longer line Highway 35 (shown below), the community is still in the middle of recovering. The town initially lost 20% of its residents due to displacement, and it’s taken a toll on the local economy. There are still buildings that are unusable — some due to the long waitlist for contractors and others because insurance hasn’t paid out yet. A few hotels are just reopening and some local businesses are trying to staff back up. Vacation rentals — especially along Aransas Bay — that accounted for some residents’ primary income are also still gated off.

All of this is just a portion of what I heard while talking to Laura and her sister a couple of months ago. What was supposed to be a 30-minute meeting to discuss updating her online store turned into a six-hour chat. I had a ton of questions about the hurricane as someone who witnessed it from three hours away. [After the first day, much of the news coverage focused on Houston.] It was during this chat that Laura said, “It was a wonder that this place survived, especially since our shop next door was destroyed.”

“You mean this building? Did you take the pieces with you?”

“And they survived? Or did you have to make all new ones?”

“No, they survived. And somehow all my stained glass sheets did too.”

While there are many anecdotes from the hurricane, this was a personal one that I knew I had to share as soon as I heard it. That a hurricane left something as fragile as a house full of glass intact.Some of the other amazing stories that came from Rockport after the hurricane: local groups driving bulldozers to help clear people’s land, residents going door-to-door with chainsaws on the back of pickup trucks to break down fallen trees (without being asked to), and how H-E-B and Wal-Mart gave out supplies in the parking lot, to name a few. “Rockport Strong” wasn’t just a saying spray-painted on buildings; the community embodied it. They banded together and continue to do so.

It’s been two years and Laura’s nearing retirement. They’re still in the process of upgrading the shop and rebuilding other parts of their property. But this will allow her to focus even more on her passion of making stained glass art. You can check out her work at www.thelittlehouseofglass.com or follow her on Facebook here.

To learn more about the recovery efforts, here is a link to the Rockport-Fulton Chamber of Commerce site. You can also make a donation to the Chamber Foundation here.